Here at Deep Creek Lake we first had the pleasure of meeting Tom Myers beginning in 1994 when his childhood friend, Chad Sinsel from Clarksburg, WV, introduced him to Karen. They dated for a couple years, fell in love, and were married in 1997, giving them almost 24 years of a wonderful life together. A black-tie wedding reception by Martin Heise at Will O’ the Wisp Four Seasons restaurant was the occasion where many of us really got to know Tom. A special memory of Tom and Karen’s wedding and reception was not only the release of hundreds of butterflies but seeing Tom and Karen dance. Since that time whenever there was a big band dance in Garrett County, you would always see Tom and Karen along with Wayne and Linda Bolden, the only two couples on the dance floor enjoying that last dance of the night. Their affection for one another radiated as they danced the fox trot and the swing.
Tom has four beautiful daughters, 15 grandchildren and one great-grandson. The two families of Karen’s and Tom’s became one. Many family gatherings were held here at Deep Creek. Trips also were planned to meet at Tom’s riverfront home on The Mattaponi in Virginia, where a wonderful blended family relationship developed. Tom loved his grandchildren and was there to help each with their education.

Tom’s golf group was a highlight of his life. He enjoyed the game and the camaraderie. He especially loved his Manhattan beverage at the 19th hole, prepared exactly to his liking. Tom was very specific about the exact ingredients of his Manhattan. He would critique the waiter on just how it was to be made. Betsy, his step daughter, had a better idea. She prepared small laminated cards with the exact mix for Tom to carry in his wallet and send to the bartender. Tom loved that idea for his exact Manhattan. Here at the lake where the bartenders knew Tom, the card was not necessary and his drink was prepared and served to perfection. In the last several years as Tom’s vision was in decline, his friend Ted Frantz would visit to take Tom and Bella, Tom’s French Poodle, for a walk. Quite often Ted would take Tom to Thousand Acres to play golf. As Tom’s vision deteriorated even further, Ted continued to help by observing the direction of Tom’s ball and to find it as they moved along each fairway. Ted himself was not the best golfer, so I am sure there were “Mr. McGoo” moments of humor and laughter that came out of their journey around the golf course.

Tom was instrumental in several endeavors in Garrett County that quite likely very few folks knew about. One was as a board member of the Property Owners’ Association of Deep Creek Lake (POA). He also served as Chair of the Board of the United Way of Garrett County. He helped to arrange that all funds raised in the county would stay in the county. Tom then established that a donation envelope be placed in every POA newsletter sent to each member of the association. Today the largest amounts of contributions to the county United Way are coming from Deep Creek property owners in our basically rural county. Along with Bob Huebner, Tom was directly responsible for starting Christian Crossing thrift shop in Loch Lynn. With the help of Pastor Robinson, Tom started the St. Mark’s Lutheran Early Christian Learning Center.

Many years ago, nine couples of us chartered three 50-ft. Beneteau sailing yachts in the British Virgin Islands. Two of those boats were with a professional crew (captain and cook) for us tourists. The third boat was chartered as a bare boat crewed by Tom and Karen Myers and friends of Tom’s from California. The fellows were seasoned sailors and had experience on both their personal boats as well as several having rented bare boats before. During the week we planned a race from Anagada south to Road Town, about a three-hour sail. Tom’s friends had sailed in the Caribbean many times and one fellow had actually sailed with his wife and daughter around the world. To make a long story short, Tom and his friends got to Road Town about 30 minutes before our other two boats arrived. The old salts showed the two professional captains how to trim the sails and won hands-down. Tom was in his glory. 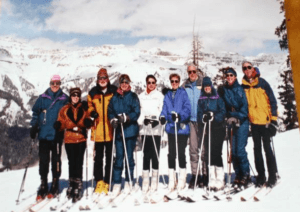 This photograph is of our ski group at Telluride, CO, at the top of a run known as The Plunge. It is a double black diamond so steep that the groomers are tethered to a long cable to secure them when grooming up the slope. During the early part of that week there was mention several times of The Plunge and that we would ski it during our stay. The hype continued to build, and a special concern was about taking Tom with us. Several alternate routes were presented to Tom, who was not really a double black diamond skier. Nothing would do, Tom was in for the run. In the photo Tom and Karen are on the left and Ted and Barbara Frantz are on the right. We were very careful, and we all made it down. Double Manhattan’s were enjoyed that evening before dinner. In this story Tom displayed several qualities: his desire for excellence and perfection, his goals for wholesome fellowship, and being one of the guys. Those of us who knew Tom saw those qualities in all of his endeavors from working on his collection of antique clocks to planning a bicycle ride.

Tom was a unique gentleman, a kind, thoughtful, generous, and loving soul. In acknowledging his appreciation to anyone, he did it in the form of a handwritten note instead of a commercially produced thank-you card. He always expressed thanks to those who would call or visit him. He was overly appreciative for the staff of Hospice, his caregiver Megan, his loving wife Karen, Dr. Tom Johnson, and the many family members and friends who cared for him and kept him with us for more than three additional months after he took very seriously ill.

In closing, I’ll borrow some words from the Apostle Paul. Tom, you have completed the course, you have kept the faith. Tom, you shall always be loved by all who were blessed to know you.

An obituary from Yale University highlighting Tom’s professional career can be found at https://alumninet.yale.edu/classes/yc1957/obit.html#wtmyersjr.